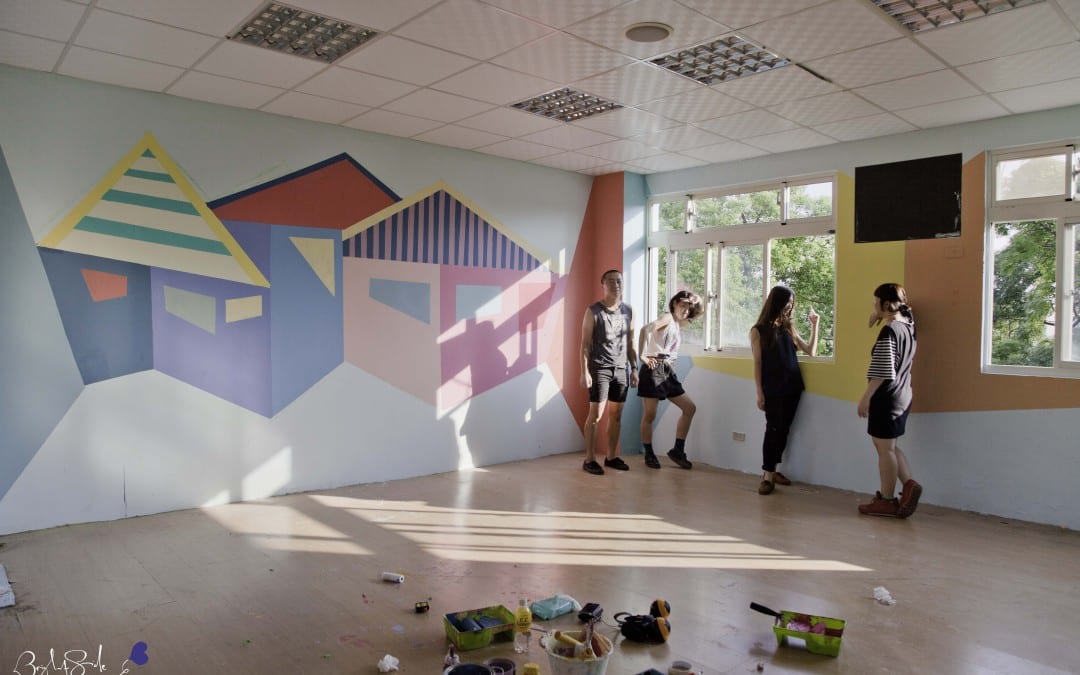 It has been an exhilarating ride as people rallied together to beautify and build a home for the children of MuHsiang. Just as integral as each of the kids were to the gorgeous creations of the rooms, were those who provided their time and resources during the summer. It is on these terms that almost 100 strangers became friends and reconnected as a community in the summer of 2014.

Everyone’s laughter and presence will be treasured. Whether it was the early morning or later than anticipated ride to/from Taipei and Taoyuan, stained hands from sanding picture frames, the unwashable speckles of paint stains in our hair and clothes, back and forth late night messaging instructions on the vegetarian menu. There was no broadcast system but we screamed freely from various levels of the project site. Everyone strained their backs to wash paint buckets in sinks built for 3 year olds. No one complained about sauntering down to the convenience store for the one restroom that serviced 70 of us, at some point or another. Everything and every person fell into place.

I have to admit, however, that one of stand out moments was in the beginning. When this project was baking in my head, I reached out to others. I was told directly that even for a well-funded and established art organization, this project and 6 week turnaround was impossible.

Thus, I am acutely aware of the privilege and honor bestowed on me from those who took their time to complete this summer task. Everyone worked extremely hard and did their best to accommodate even the most minor and last minute requests that I came up with as the project moved forward. This included a last minute birthday surprise for James, a solid friend that oversaw some important aspects of BUILD A HOME.

BUILD A HOME served to not only tie community involvement but an in-action project to show the intrinsic value of what a home means. At this point I am unable to stop forced eviction and people from losing their homes. But I am trying to show that the value of the home is not the proximity to a science park, shopping mall, or mass transportation, but whatever those who live there deem it to be. I am unable to end sexism, sexual harassment, and gender stereotypes, but I have tried to go vocalize and question this incident by incident, still learning as I go. I am unable to end animal cruelty but I have tried to introduce generally meat-free fulfilling, creative, and delicious food to all participants. I am unable to cease the use of plastic but have stayed up till 2am every night to boil liters of water for the next day. I am unable to empower others in what the modern world has deemed as “empowerment” in economic terms, but I hope that I have showed that with compassion and what time you have, you can already influence and make a difference in the world. There are things I could do better and I ask and want the chance to do this and more in the future with Bright Side Projects.

Everything we do, even “summer projects,” should simply be cease to be time-restricted activities but extensions on our way of life. Thank you to everyone. In the end we made so many new friends and the kids had a beautiful new home they were a part of creating to call their own! We all created a more beautiful world as well.